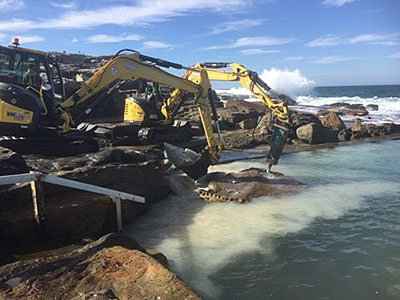 Swimmers, walkers and whale watchers at north Maroubra were treated to a spectacle on Saturday 1 August 2020 as contractors for Randwick City Council worked to remove a large rock from Mahon Pool.

Hundreds of people watched on as heavy machinery worked at the pool’s edge to tackle a 25-tonne boulder that washed into the pool during a recent storm. The rock had been causing a headache and safety risks for swimmers at the popular ocean pool.

Randwick Council engaged Statewide Civil who tackled the tricky job by dragging the rogue rock to the poolside and then broke it apart with heavy machinery.

The smaller rock pieces were then moved to a new home away from the pool.

The pool was then safely reopened to swimmers from Sunday 2 August 2020.

It’s not the first time a big rock has caused headaches for swimmers. In November 2016 a similar sized rock was washed into Giles Baths at Coogee. (see RCC story and ABC News story)

Council considered a variety of techniques to remove it including explosives, helicopters and floats, but eventually decided to use a 180-tonne crane to winch down two smaller excavators some 40 metres from the cliff tops at Dunningham Reserve. The two machines then worked at low tide to break up and remove the rock. 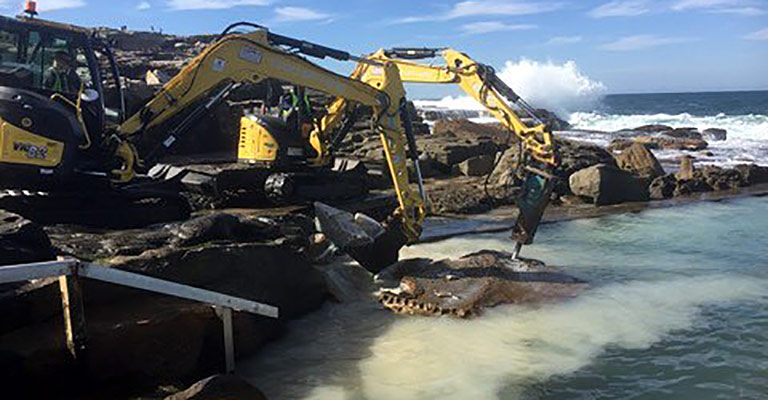