The 2022 nominations for the Sports Award are now closed.

The winners will be announced at a special award presentation ceremony (invitation only) on Thursday 27 October 2022.

Since 1979, Randwick Council has acknowledged our finest young athletes with the Bradley Matthews Memorial Award for Sporting Excellence. This award is open to students aged 13 to 18 years who live, attend school or are strongly affiliated with a sporting club within the City of Randwick.

The Randwick City Junior Sporting Award recognises our young sportsmen and women and encourages their dedication and commitment to their chosen sport. This award was created to acknowledge up and coming young sports stars aged 5 to 12 years.

Council's Hall of Sporting Champions acknowledges sporting legends who were born, or live, in Randwick or have represented Randwick City at state or national level. Many of those acknowledged have been champions of decades gone by, right up to present day Olympians.

The Randwick City Hall of Sporting Champions board is on display in the foyer of Bowen Library, Maroubra. Presented under the Seal of Council, these awards acknowledge our finest athletes who join a long list of high-profile winners, including:

Sporting Excellence - Junior and Youth with a Disability

Randwick Coach of the Year

A new award for 2022, this award aims to recognise a dedicated local sporting coach within the City of Randwick. We are looking for the special individuals who go above and beyond for their teams; providing mentorship, support, specialist expertise, skill and knowledge beyond expectations.

A mighty congratulations to Tali Baltineshter for winning the 2021 Bradley Matthews Memorial Award for Sporting Excellence for her success in Javelin Throw and Basketball. Tali is a role model and a mentor to younger javelin athletes and basketball players. She is always happy to assist her coaches when training younger kids and encourages kids to take up both sports. Tali is currently ranked #1 in Australia for U16 Women's Javelin and number #3 in the World for her age group. Tali achieved gold for the U16 Women’s Javelin at the National Australian Athletics Championships.

Marnie Laurence is just 9-years-old and already the success she achieves in all of her chosen sports is impressive! Excelling in athletics, surf lifesaving, cross country and AFL, Marnie has exceptional physical ability and talent as well as a dedicated work ethic. Yet it is her humble nature and commitment to her team that really sets Marnie apart. She is always on hand to support her peers and has a true willingness to help others. Marnie has had a stellar season, performing at the highest level receiving many accolades, including:

Jett Stokes started mountain biking when he was just six years old and since then has achieved remarkable feats for his young age, in both cycling and long-distance running. Jett is the youngest cyclist in the world to complete ‘Half Everesting’, climbing and descending a hill multiple times in 24 hours to achieve the elevation of 4454m (half the height of Mount Everest). Jett cycled Bradleys Head Road near Taronga Zoo in May 2021 to complete Half Everesting at age 10. A member of the Randwick Botany Cycling Club, he carries himself with such dignity for his young age. He’s always the first to congratulate his competitors, even when he hasn’t won, and represents his club with pride. In 2017 Jett rode 169km over four days doing the Otago Rail Trail when he was just 6 years old. His list of highest achievements include:

We welcome rugby league player Sean Garlick to the Sporting Hall of Champions for his contribution to sport in the local area. A great player a good leader, Sean played for both the South Sydney Rabbitohs and Eastern Suburbs Roosters, where he captained both teams at various times.  Sean is a fine sportsman, who played all his sport locally. An inspirational leader, Sean is a great communicator and a very successful businessman and is now the owner of Garlos Pies. A dedicated family man, he retired from playing when he was at a senior competitive level.

We'd like to acknowledge the contribution Les Davison from the La Perouse Aboriginal Community made to sport in our area. Uncle Les was an outstanding boxer and was selected and taken to the 1956 Olympics in Melbourne, however he was turned away and unable to fight because he was Aboriginal. Sadly, Uncle Les passed away on 15 August 2021; our community and especially our aboriginal community suffered a great loss with his passing. This year, Randwick City Council would like to acknowledge Uncle Les for the outstanding athlete that he was by inducting him posthumously into the Randwick City Council Sporting Hall of Fame.

We’d like to give a very special thank you to the South Sydney Rabbitohs for their on-going support of the Randwick Awards for Sporting Achievement through the generous donation of prize-packs for all nominees in 2021.

James Tirado is a vision-impaired para-athlete, who has represented Randwick/Botany Harriers, NSW and Australia. He has also represented Marcellin College Randwick in Athletics and Cross Country at regional, state and national events. He is a National All Schools Champion for the 800m para and holds the current Australian Record for 800m para for T13 vision-impaired athletes. James is a dedicated, hardworking athlete who not only has the determination to win state and national titles but displays care and understanding towards athletes with a disability. He has been a great role model for younger vision-impaired athletes by providing them guidance in undertaking sports and overcoming obstacles to achieve sporting success.

Ruben started cycling in 2017, joining the Randwick Cycling Club and participating in the junior program every Saturday afternoon at Heffron Park. He quickly progressed and has been competing in events all over NSW and Australia, winning the NSW under 11 Cyclist of the Year Award in 2019 and travelling to the Netherlands and competing in a junior tour event there. Ruben has made a big contribution to junior cycling at Randwick Cycling Club, encouraging other kids to have a go and making lots of friends from within the club and around Australia.

Piper Simpson first ran competitively for Clovelly School, aged eight. Two years later she was training with Up and Running and had joined Little Athletics. In 2019 Piper was unbeaten on the track at 800m and 1500m in her age group, culminating in double individual gold at School State and National Championships. Piper is a humble champion, valuing her sporting friendships and always encouraging her teammates to do their best. Last year Piper asked to enter the Balmoral Burn – an uphill sprint- and raised over $1000 for the Children’s Hospitals.

Both Lisa and Karen were the first ever women to compete against the men in surf lifesaving Iron Man racing. If it wasn't for Karen and Lisa ironwoman racing wouldn't have been established. Lisa's main achievement was paving the way for the ironwomen of today as she was an original pioneer of the sport. Lisa has been a credit to her club, family and the sport of surf lifesaving. Karen's has represented Australia in conducting surf awareness training, passing on her knowledge of the sport to the younger generation entering the sport. Both Lisa and Karen have also achieved many great results racing in numerous competitions such as: Nutri Grain series, Ella Bache series, Devondale and the Meadow Lea Series. They have represented their country, state and local club at many carnivals over the years, travelling all around the world to compete. Lisa was the first women to sign a contract with surf lifesaving and Kellogg's Nutri Grain Iron Man series. Lisa and Karen are now both retired but continue to give back to the community with coaching the next generation of surf sports athletes at Maroubra Surf lifesaving club.

Mat has obtained almost every Surf Life Saving award including the Gold Medallion. He has been a highly valued member of Maroubra Surf Life Saving Club for 15 years and currently holds the positions of Patrol and Club Captain, Captain of Surf Rescue 30, and is an integral part of training and assessment, development camps. Mat’s focus on education and lifesaving at the club has resulted in record numbers of proficiencies, Bronze and education numbers.  He is an active champion competitor, Nippers coach and mentor for young members who fosters a caring, safe and helpful environment for all his 250+ volunteers.  Mat is a strong and influential leader within the local community as well as in the surf lifesaving community.

Kate won Gold at the Korean Taekwondo Association of Australia in the 40-50kg Black Belt Division. She is currently preparing for her Senior Black Belt. Kate also plays AFL for the U18’s Maroubra Saints. Last season, Kate received the Spirit of the Game Award for her onfield behaviour and respect for others. Kate was also selected for the 2019 AFL NSW/ACT Female Talent Program Academy. She has also represented her school and local sporting clubs at state and national levels.

Marcus attends Marcellin College Randwick, where he is recognised as the 2019 U13’s Age Champion for Swimming. At the school swimming carnival this year, he broke 2 records – one record was standing since 1985. He has achieved incredible results, including participating at the 2019 NSW State Age Championship, placing 1st in 12 year old Boys 50m, 100m and 400m

Representing NSW in the under 14’s Female Javelin at the 2019 Australian National Athletics Championships. She won silver, which ranks her second in Australia even though completing 2 age groups higher.

One of the modern day legends of the Rabbitohs, 'Sutto' is the Club’s most capped first-grade player and has played more grade games for the Club than anyone else in its 111-year history. John is a Souths junior who captained the Club to its 21st premiership success in 2014, and still holds a leadership role within the squad. He became the first Rabbitohs player in history to have a Testimonial Match, which was held at the hallowed Redfern Oval.

The 2019 winners were announced at a reception hosted by the Deputy Mayor Cr Philipa Veitch on Thursday 24 October 2019.

Max excels in swimming and surf lifesaving. He has been a consistent top 10 performer at state age swimming and state nippers. He proudly represents the UNSW swimming club, Coogee Minnows and Randwick Public School.

Alice is a rising table tennis star and a huge talent. Her outstanding results include being ranked 8th in Australia and 3rd in New South Wales for her age group. Alice has also won two gold medals, seven silver and one bronze medal at NSW State Competitions.

Lea has been competing in Water Polo for over 13 years. Her achievements are outstanding, she has represented Australia in the Rio and London Olympics as a goalie in the Water Polo team. She also won Best Goalie in the National Water Polo League in 2018 for the UNSW team. Outside of training and playing water polo, Lea volunteers her time to coach juniors and promote water polo to the community.

Two new athletes were inducted into the Randwick Hall of Sporting Champions in 2016: 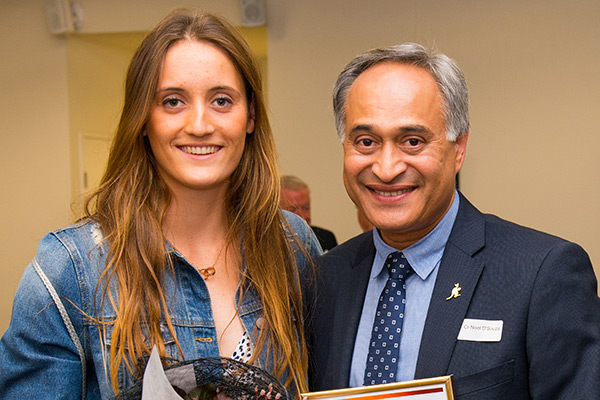 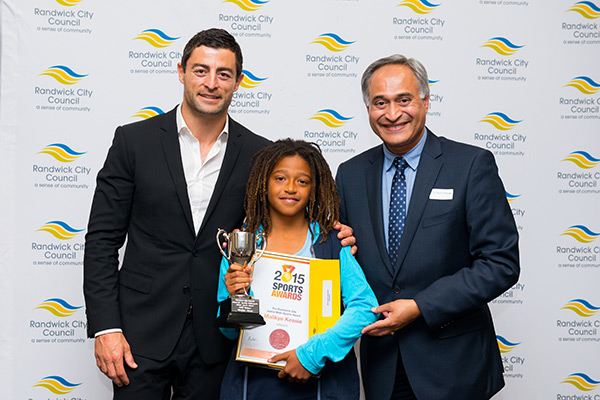 Two new athletes were inducted into the Randwick Hall of Sporting Champions in 2015:

Julian and Cianna: Live at the Watchtower