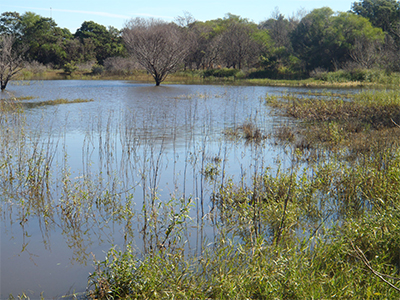 We’re very lucky in Randwick City to not only have stunning beaches and coastal walks, but also our very own wetlands located in Randwick Environment Park.

Where does the water go?

The water in the wetland constantly seeps through the sandy soil and into the water table under the earth. It drains to the south-west and replenishes the Botany aquifer. The Botany aquifer is large volume of underground water, which runs from Centennial Park to the Botany Wetlands and into Botany Bay.

Prior to human intervention, surface water from the surrounding northern and eastern slopes, would have drained into a swampy sedge-land. Today, water flows into the wetland from four stormwater lines, which were put in place.

These pipes are located under the eastern and southern viewing platforms, at the crook of the ‘L’ and into the creek in the south eastern corner near Henning Street. Each outlet includes a gross pollutant trap: a cleanable trap that collects litter, silt and green waste which we regularly empty.

The Henning Street outlet includes a man-made creek with a rock-lined riparian zone (the area between land and a river or stream), and vegetation on each bank, slowing the water and preventing soil erosion.

When you walk through the wetlands, you can notice the change in appearance of the vegetation at each outlet - heavier weed infestations are a result of the nutrients dissolved in stormwater. A large overflow grate is visible at the southern end of the wetland. This drains excess water when the level of the wetland reaches 32.5 m above sea level to the major stormwater outlet at Lurline Bay.

What’s the history of this site?

In fact, more than 90 species of indigenous plants have been identified within the park to date. It contains 3.6 hectares of Eastern Suburbs Banksia Scrub, a critically endangered ecological community. The bushland is also open to the endangered Sunshine Wattle.

Home to many native animals and plants, the wetlands walk provides a lovely setting for a casual stroll, especially for bird enthusiasts or those who prefer a shorter walking distance. Walk around the path bordering the inside oval or complete a 1.3 km loop taking in the wetland and sustainability hub.

There is currently a section of the wetlands walk (linking the existing concrete paths at Munda St Reserve and Joongah St) that is unfinished and inaccessible for prams or wheelchairs. This extension is in the plans as part of Randwick City Council’s capital works program for the future.

Depending on rainfall, the wetlands may not last long, so get there quick for a look at this lovely nature-filled environment, right on our doorstep.

Want to visit the wetlands? They're part of Randwick Environment Park, which is located at 6R Argyle Crescent, Randwick.