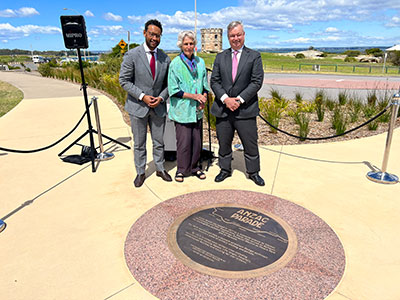 A plan 100 years in the making to have dedicated memorials at both ends of Anzac Parade has been realised today, 21 November 2022, with a bronze memorial plaque unveiled at La Perouse.

“Anzac Parade is a road like no other in our communal memory,” says Mayor Parker.

“It was dedicated in 1917 in memory of the soldiers who fought and died in the Gallipoli campaign and was always intended to be a remembrance parade of national significance.

“At the 1917 dedication ceremony, the then Mayor of the City of Sydney referred to an Anzac monument at La Perouse.

“But this reference was forgotten until a local Randwick resident and a daughter of an Anzac soldier, Margaret Hope, brought it to our attention.

“Council then formed a trust and working group to further explore the area’s history and to consider an appropriate memorial to mark the southern commencement of the parade,” says Mayor Parker. The route of Anzac Pde contains dozens of direct links to Australia’s military history including army barracks, storage and training facilities as well as hospitals, soldier settlement housing and schools.

The area also contains multiple memorials and monuments with local streets, parks, and reserves names in honour of battles, ships, wartime leaders and places of conflict.

“The La Perouse Anzac Memorial is an important reminder that we should never forget the meaning of Anzac Parade,” says Mayor Parker.  “It holds a special place in the consciousness of our nation and helps define who we are.”

2023 Grow It Local Awards are now open for entries