A permanent alcohol ban applies at this location.

The project is jointly funded by Randwick Council and a grant from the Australian Government’s Smart Cities and Suburbs Program.

The name Coogee is taken from a local Aboriginal word koojah which means "smelly place" owing to the amount of seaweed that can collect on the beach. But daily beach cleaning by Randwick City Council staff keeps the beach in pristine condition year-round.

The beach is sheltered by a rocky island called Wedding Cake Island which makes it an ideal swimming beach for families and a calmer option than nearby Maroubra Beach.

There is a rock pool at the northern end (Giles Baths) and a man-made rock pool at the southern end of the beach (Ross Jones Memorial Baths) near the Coogee Surf Life Saving Club. Just a few minutes walk south of the beach along the Coastal Walkway are two of Sydney's most spectacular ocean pools – McIvers Baths (women and children only) and Wylie's Baths.

Coogee Beach is located on Sydney's famous Coastal Walkway which stretches from Bondi Beach to Maroubra Beach. Coogee Beach has grown from a destination for day trippers in the early 1800s to one of Sydney's most frequented beaches. Nearby you'll find bustling Coogee Bay Road with an assortment of great restaurants, cafes and ice-cream shops!

The parks and reserves around Coogee Beach are ideal for a picnic with a range of barbecues and playground equipment. Dogs must be kept on-the-leash at all times in adjacent parks and they are prohibited from the beach, playgrounds and food preparation areas. There is an off-leash dog park just five minutes walk south of Coogee Beach at Trenerry Reserve.

Alcohol is prohibited at Coogee Beach and all nearby beachside parks.

Coogee Beach is also known for its dangerous shore break. Lifeguards want to ensure you have a safe time at Coogee, so follow these three tips. Watch the video to find out what they are.

The NSW Office of Environment and Heritage Beachwatch program advises as a general precaution to avoid swimming during and for 24-hours after heavy rain. Stormwater runoff from surrounding streets drain to the beach and nearby coast which may pollute the water.

Follow these simple rules to be safe at the beach:

Coogee Smart Beach technology solutions, including the Coogee Beach Live Stream are provided through the assistance of the Australian Government Smart Cities and Suburbs Program. 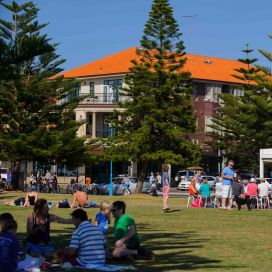 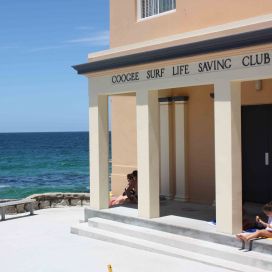 Give us your feedback

A directory of services and groups to help you stay safe in the water.

Get the Site Right building blitz