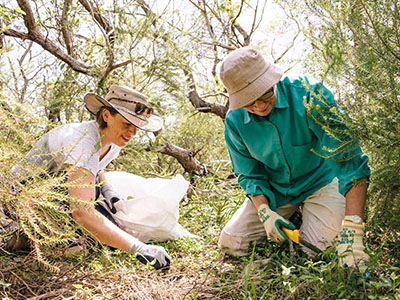 Eastern Suburbs Banksia Scrub (ESBS) is a critically endangered ecological community listed under the Biodiversity Conservation Act 2016 (NSW) and the Environment Protection and Biodiversity Conservation Act 1999 (Commonwealth). The community once grew extensively on about 5,300 hectares of land between North Head and Botany Bay in Sydney, but less than 150 hectares (or about 3%) of the original extent remains. These remnants are scattered across Sydney’s eastern and northern suburbs such as Randwick, Botany Bay and Manly.

The community is characterised by low-lying sclerophyllous (hard-leaved) heath or scrub plants growing on 100,000-year-old wind-blown dune sands overlying sandstone. The lay of the land allows for some remnants to support small pockets of woodland, low forest or wetter areas where soil deepens or moisture collects. Some common plants in an Eastern Suburbs Banksia Scrub community include:

Why is Eastern Suburbs Banksia important?

ESBS is a unique assemblage of plants, from small trees and shrubs to low heaths and grasses. It contains habitat, which shelters small native animals such as ringtail possums, blue-tongued lizards and birds. Native birds such as the Yellow-tailed Black Cockatoo and Wattle Birds rely on it as a source of food.

In Randwick City, ESBS can be found in a few locations in Randwick City, including the Maroubra to Malabar coastal walk, the Prince Henry Centre in Little Bay, and within Randwick Environment Park. Throughout these locations we employ best practice bush regeneration techniques, regular surveys and controlled burning to bring back the scrub. If you would like to be involved in the conservation of ESBS you can join our Prince Henry and/ or Randwick Environment bushcare volunteer groups.

If you're interested in reading a peer-reviewed journal article, written by former Randwick Council staff on  rescuing this endangered ecological community, click here.

Although the entire ecosystem is likely too big for your backyard, you can help restore habitat for wildlife and improve the connection between remnant patches by planting some ESBS species in your garden.

IndigiGrow,  a 100% Aboriginal owned and operated nursery has ESBS plants for sale in their locally run nursery in La Perouse. Learn more here.