At Lionel Bowen Library we’re celebrating the 50th anniversary of the Wrapped Coast! This exhibition celebrates a defining moment in Australian art and culture.  It features rare artefacts from the installation including Sarlon-printed invitations, original images courtesy of the National Gallery of Art Washington DC, newspaper clippings and Kodachrome photo slides. We’re also proud to have oral histories from artists who worked on the project or visited it in 1969, including Eileen Slarke, Ian Milliss, Brian Mahoney and Ellen Waugh OAM. All these precious items are remnants of a nascent artistic identity that has grown exponentially with the aid of artistic organisations such as Kaldor Public Art Projects.

Wrapped Coast ran all the way from 28 October to 1 December 1969. You can see the now precious artefacts from the installation in our fantastic exhibition space at Lionel Bowen Library and witness how our local history became global one. Read on below the exhibition image gallery for more information about the original installation. 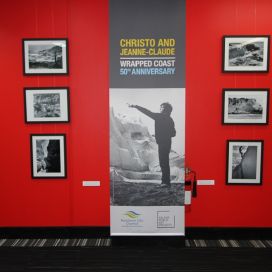 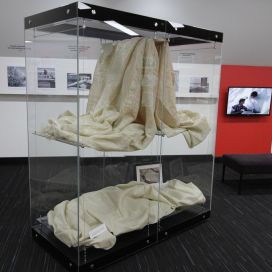 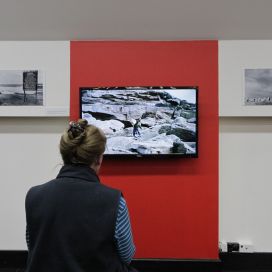 On October 28 1969, internationally renowned artist duo Christo and Jeanne-Claude unveiled – or veiled – their latest creation. At the time, Wrapped Coast – One Million Square Feet, Little Bay, Sydney, 1968-69 was the largest single artwork in the world.

The power couple’s installation was the Little Bay coast, wrapped in Sarlon, an agricultural erosion control mesh. Over 90,000 square metres of this cream-coloured fabric was needed to wrap Little Bay entirely – with project manager John Kaldor AO later reflecting that “Little Bay was little in name only.”

For John Kaldor, Wrapped Coast was to be a monumental event in his artistic career. It was designated as ‘Kaldor Public Arts Project No. 1’ – the beginning of a half-century career dedicated to developing Australia’s (and the world’s) art scene.

But the Wrapped Coast’s development wasn’t without controversy. Politicians and bureaucrats were adamant that the project wasn’t “an appropriate use of Crown (Government) lands.” The press was also stoking public discontent, adding concern to the “goings on” down at Little Bay.

These concerns evaporated on 28 October when the public were finally allowed to see the installation. The wrapping gave the landscape a sculptural appearance. It glinted in the sunshine – the lustre of the Sarlon gave it the appearance of silk from different angles. It flowed majestically over gullies, cliffs and coastal boulders each individually parcelled by Christo himself. The land and the ocean became one.

Local artists were taken aback by the artwork’s power. Ian Milliss, an eighteen-year-old Sydney artist who worked on the project described Christo and Jeanne-Claude’s Wrapped Coast as “the eroticisation of the landscape.” Artist Brian Mahoney also worked at the Little Bay site and remembers it as “audacious” and “like a snowfield.” Ellen Waugh OAM, of South Coogee, was an art educator at Alexander Mackie College at the time and believes Wrapped Coast “transformed the cliff from darkness into light.” Ellen’s trips to the Wrapped Coast were captured in beautiful, now rare, coloured Kodachrome slides. She has generously shared these images in this exhibition, along with the Sarlon fabric she salvaged and stored for 50 years in an old sea chest under her house.

For more information on the Wrapped Coast and other Kaldor Public Art Projects please visit http://kaldorartprojects.org.au/.

You can also find out more about Christo and Jeanne-Claude’s fantastic contributions to art at https://christojeanneclaude.net/

Celebrate Library Lovers' Day with us on 14 February