Celebrating History Week, this exhibition explored the Victorian architecture of our beautiful suburb of Randwick.

Delve into the personalities who lived in these houses and explore what life would have been like for our Victorian neighbours.

John Walsh commenced work on this row of Victorian Italianate terraces in 1888. He built the middle terrace first, including a grand tower that would become an impressive centrepiece for the whole construction. He continued adding to the terrace, finishing with a total of nine houses in 1891. The three-storey terrace was an imposing presence on the quiet avenue behind St Jude’s Church. Walsh acquired the plot of land in 1888 from the Church of England. Controversy surrounded the use of this land as a cemetery for other religious denominations. The site was eventually sold and the funds put towards expanding the Church.

Walsh was a building and railway contractor who immigrated to Australia from Ireland. He built the Goulburn to Cooma railway, securing enough money by the late 1880s to set about his own building project in Randwick. He married Margaret Jane Clohest in 1867. The grand central terrace, then no. 5, was more than big enough to accommodate his six daughters, affording them the luxury of their own bedroom. The staircase was adorned with elaborately carved wooden balusters handsomely embellished with the family initial. The row of terraces was placed on the Register of the National Estate in 1978 and is currently listed on the State Heritage Register.

The library holds a number of images of Avonmore, which can be found in the catalogue.

Roslyn is one of the few remaining Victorian houses in Coogee. It was built in 1886 for timber merchant Charles Thomas Saxton. The house was originally set on a larger parcel of land and included a grand entrance, gardens and a conservatory. Coogee residents could see the house standing tall on the hill from the beach. The house has fourteen rooms in total and a roof lantern with views down to Coogee beach. It contains fourteen bedrooms and a circular mezzanine above the entrance hall. The house was richly decorated with stained glass windows and cedar joinery. There are three ornate wooden fireplaces, a point of difference from Normanhurst’s marble detailing. This was no doubt a result of Saxton’s involvement in the timber industry. These pictures of Roslyn show a family enjoying their grand residence and its grounds, where they could play a game of croquet and wander around with their dog in the fresh sea air.

The library holds a number of images of Roslyn, which can be found in the catalogue. 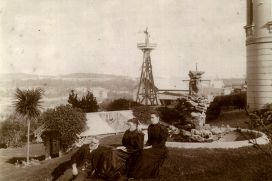