Improving our streets and public places

We are working hard to improve our streets and public spaces to make them safer and more inviting, especially for people walking or riding a bike.

Transport for NSW is planning to install pop-up cycleways on Todman Avenue, Kensington and High Street, Randwick to give people a safe option for travel during COVID-19.

A key public health measure, COVID-19 pop-up cycleways are designed to make it easier and safer to ride to employment, shopping, and education hubs, providing an alternative to catching public transport or driving.

Transport for NSW is working with Randwick City Council to finalise the plans for the new pop-up cycleways. The community will be notified at least four weeks prior to any construction commencing or changes to the local road environment.

This includes providing the right level of local access including parking or loading zones for residents and businesses, ensuring access to properties is always available and enabling deliveries and short-term visitors where possible.

The pop-up cycleway is planned to start at the corner of Anzac Parade and run along High Street for 850 metres to Wansey Road, Randwick.

It will be located on the northern side of the street and feature one lane going in each direction placed between the kerb and travel lanes.

Some parking spaces on the northern side of High Street, Randwick may be removed to accommodate the cycleway. Transport for NSW is currently working with Randwick Council to prepare a detailed design to determine the changes to parking that may be required.

The pop-up cycleway will start at the Eastern Distributor and run along Todman Avenue for 1350 meters to Doncaster Avenue, Kensington. It will be placed between the kerb and parking spaces and have one lane going in each direction on the northern side of the road.

A physical barrier to parked cars will also be installed for cyclist safety. Some parking spaces on Todman Avenue may be reduced to accommodate the pop-up cycleway. Transport for NSW is currently working with Randwick Council to prepare a detailed design to
determine the changes to parking.

For more information, visit the Transport for NSW website, call 1800 573 193 or email covidpopup@transport.nsw.gov.au.

Randwick Council is due to consider approval of this project at its Council Meeting on 25 June 2019. Should this occur, funding would need to be applied for and received from Transport for NSW for construction to occur. There is no set timeframe for this.

What do the orange and green ribbons mean?

To help inform the community about the impact of the project on street trees, Council has tied ribbons around the street trees along the route.

Scroll down to check out interactive tree map.

The 1.9km route is proposed to include a separated cycleway, providing people with a safe, pleasant and healthy alternative to car use for neighbourhood destinations and for longer distance bicycle commuting. The project will also involve streetscape improvements such as new trees, garden beds, footpaths and pedestrian crossings to enhance the amenity of the streets along the route for everyone. 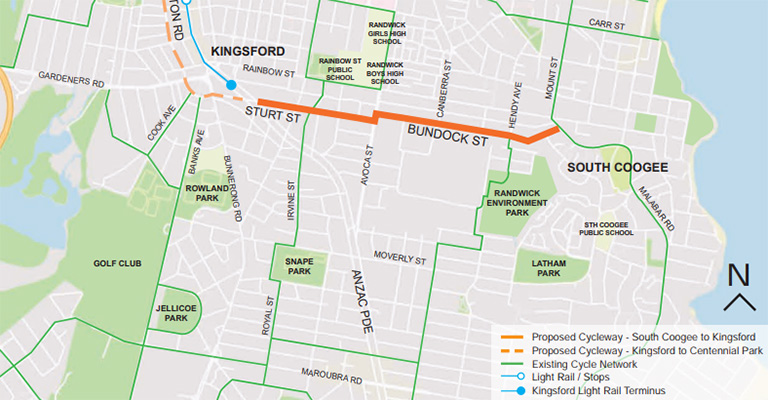 Every one of the up to 37 trees proposed for removal in the initial design concept have been reviewed and assessed by an independent arborist with a view to saving as many possible. Council has listened to the community and modified the design to significantly reduce tree loss. The revised concept plan has resulted in 27 trees saved – most of which are significant trees atmore than five metres in height.

To view the map full screen use this link

The project is in partnership with Transport for NSW under the Active Transport Program, an initiative to strengthen active transport – that is, walking and cycling – in key areas. In particular, the Transport for NSW program prioritises connections within five kilometres of public transport interchanges such as the Kingsford Light Rail Terminus.

The concept design for the South Coogee to Kingsford cycleway was on public exhibition for community feedback from 30 October to 23 November 2018. Information about the proposal was posted to local residents and ratepayers, advertised in The Southern Courier and every property along the route was door-knocked.

The concept designs were exhibited at Council's Administration Building and Libraries and also online on our consultation website. Your Say - Randwick. 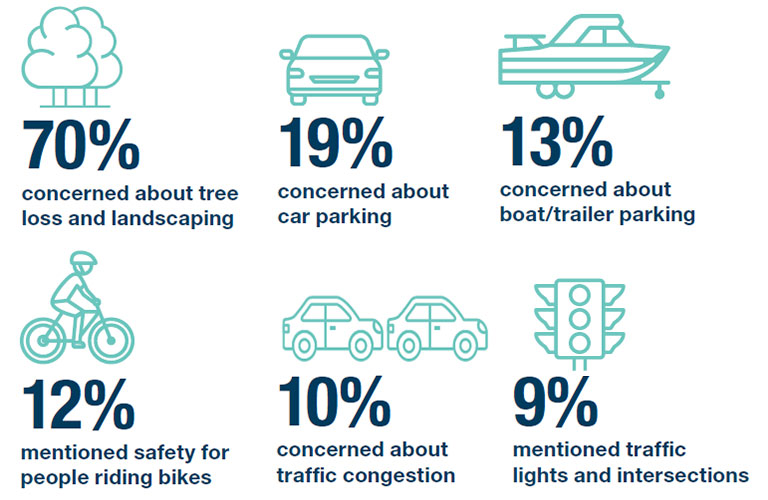 Of the 291 submissions received through Your Say Randwick:

Of the 473 email submissions received:

You can view all submissions received and Council's response by downloading the following document:

It was clear from the feedback that retaining as many trees as possible is the most important issue for many people. Council staff have considered all the feedback and made amendments to the design concept to improve the design.

How does a separated cycleway work?

A cycleway that is separated from the footpath and the road significantly reduces the conflict and likelihood of accidents between people who walk, people on bikes and motor vehicles. It is widely acknowledged that providing safe cycling infrastructure is the key to making bike riding a viable transportation option for many in the community.

Riding a bicycle on the road requires a person to mix with traffic, often forcing the bike rider to ride close to parked cars where there is a risk of ‘car dooring’. Separated cycleways have been built throughout Sydney and around the world and can integrate with streets with intersections, driveways and traffic lights.

Feedback from City of Sydney indicates that on many of their separated cycleways the bike trips have increased significantly and crashes have gone down.

Numerous studies have shown that when it comes to riding bicycles in cities people generally fall into one of three groups:

It’s this majority cohort of people who’d like to ride, but are worried about safety. Separated cycleways make it safer to ride a bicycle as bicycle lanes are separated from moving traffic.

Cities around the world are demonstrating that if you make cycling safer and easier, more people will cycle and this benefits everybody and puts less pressure on our road network.

This route will provide a south-north connection from Kingsford to the city travelling through Dacey Gardens along Houston Rd, Day Ave and Doncaster Ave to connect with existing pedestrian and cycleways at Centennial Park.

The 2.6km route is proposed to include a separated cycleway, providing people with a safe, pleasant and healthy alternative to car use for neighbourhood destinations and for longer distance bicycle commuting. The project will also involve streetscape improvements such as new garden beds and shrubs to enhance the amenity of the streets along the route for everyone.

The project is in partnership with Transport for NSW under the Active Transport Program, an initiative to strengthen active transport – that is, walking and cycling – in key areas. In particular, the Transport for NSW program prioritises connections within five kilometres of public transport interchanges such as the Kingsford Light Rail Terminus.

The concept design was on public exhibition for community feedback from 25 May to 9 am 2 July 2018. During this time you could view the concept plans and provide your input at Your Say Randwick. Printed copies of the plans were also on display at Council’s Administration building (30 Frances Street, Randwick) and Randwick City libraries.

A report (starting on page 137) summarising community feedback was discussed at the Ordinary Council meeting on the 28 August 2018.  View the minutes (page 10).

A map of the proposed route is shown below. In 2015, Randwick City Council undertook community consultation to review our bicycle routes, and to establish priorities for constructing bicycle routes within the City. The connection from Centennial Park to Kingsford, and from Kingsford to South Coogee were both identified as high priority routes in the finalised Council network.

Council reports prepared in 2015 provide background information on the priority bicycle routes and are available here: 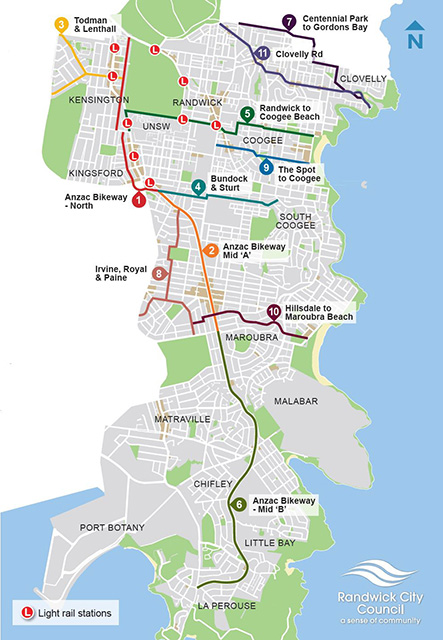 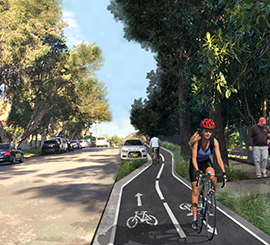 If you’re interested in the Walking and Cycling Streetscape Improvements, please consider registering your details so we can keep you informed as they develop.

Have your say on Randwick Junction Town Centre Planning Strategy

It's all happening in Kingsford