Maroubra Beach became Insta-famous in July thanks to a temporary art installation that includes a 3D perspective mural and augmented reality Instagram filter that will brought it to life. The installation ran over two weeks and replaced the annual Beach Breaks Carnival.

The large artwork was located on the Maroubra promenade, near the corner of Marine Parade and McKeon Street, and allowed people to take a photo of themselves surfing a big wave. With the addition of the augmented reality features, the beach scene came to life, complete with a moving crab, dolphin and seagull.

Each day, over the two weeks a competition was held that allowed visitors to share their creative images in the mural over Instagram, which put them in the running to win one of the daily prizes offered by the local businesses.

The artwork and AR filter was created by Vandal Sydney.

Check out the daily progress of the art installation! 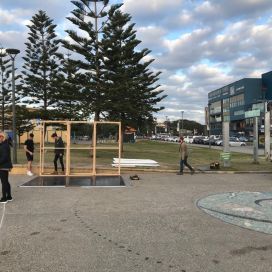 Thank you to the following local businesses that donated and supported the 2020 Beach Breaks event.

Here are some highlights from past Beach Breaks Carnivals.