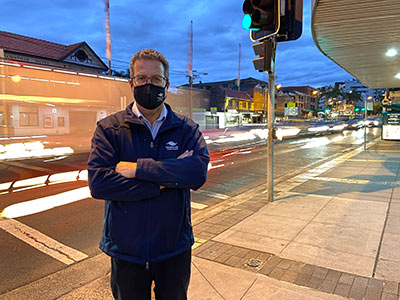 A problematic intersection in Matraville town centre at Bunnerong Road and Perry Street, could be improved with options being considered to reinstate two through southbound lanes.

Changes were made to the intersection in 2018 to improve pedestrian safety, which resulted in dedicated right-turn lanes into Perry Street and Franklin Street.

While these changes improved pedestrian safety, they also resulted in a much complained about local traffic issue with long queues of vehicles regularly lining Bunnerong Road, caused by vehicles trying to avoid the right turn lanes.

The new Randwick Council plan proposes narrowing the travel lanes, by removing most of the existing central median island, to create four Bunnerong Road lanes on both the north and southbound approach to the intersection.

This results in one lane being retained for parking and left turns, two lanes being dedicated as through traffic lanes and a dedicated lane being introduced for right turns.

Randwick Mayor Danny Said explained the plans are still at an early draft stage and subject to discussion with Transport for NSW.

“If there’s one thing that people have complained to me about regularly, it’s the impact of this right-hand only lane which was installed in 2018.  Obviously, we welcomed the improvement to pedestrian safety, but we have concerns about the resultant traffic delays which are being experienced by the community.

“Despite the fact that the right lanes continue through the intersection, the pavement arrows make driving straight ahead illegal and I’ve seen a number of people fined for the offence.

“The right turn lanes also cause traffic and safety issues with drivers finding themselves stuck in the right lane, trying to merge into the centre lane.

“The intersection also creates traffic congestion, sometimes stretching back as far as Beauchamp Road during peak times, with drivers favouring the middle lane – fearful of being ‘caught’ in the right lane.

“I’m very pleased Council is looking at design options for the intersection and I’m hopeful of working cooperatively with Transport for NSW for a good outcome for our community,” says Mayor Said.

This section of Bunnerong Road is a State controlled road and signalised intersections are the responsibility of Transport for NSW – not local councils.