It starts with a flash of silver. A few seconds later a fish leaps from the calm waters of Yarra Bay, then another and another. Spotters located at the top of a sand dune look out across the bay and detect ripples in the water moving against the direction of the wind. It can mean only one thing – a school of mullet is moving from the sheltered waters of the shoreline reef and into the shallows. The mullet run is on!

A whistle from the dunes to a two-man crew in a dinghy says it’s time to start rowing and let out the nets, while a third fisher remains on the sand to act as an anchor for the net.

The boat slowly makes an arc, surrounding the school of oily fish and draping them with a net that pulls them towards the shore and the waiting hands of eager fishers, keen to pull them from the net and put them on the cookfire.

This is a practice that has played out for generation after generation in La Perouse. “This is how we survived when there wasn’t work for Aboriginals,” says Glenn Cooley. “We’ve been doing it for as long as I can remember.”

Many families in the area can trace their lineage to before the arrival of French explorer Lapèrouse and Captain Cook in the 1770s. Their proximity to the coast meant they were skilled fishers, and those skills have been continuously handed down for hundreds of years.

Until 1980, when fishing licences were denied to Indigenous fishers, meaning they were cut off not just from their livelihood but from a significant cultural practice that involves the whole community. The mullet run is not just the chance to enjoy fresh fish cooked on coals and eaten metres from the water. The entire haul is shared amongst families and taken home, while the rest used to be sold to fish markets. Fishermen used to earn enough in that three- to four-month period to support the family for most of the year.

“When we lost our fishing licences, a lot of families suffered. Our family suffered,” says Bill Cooley. “Fishing kept us healthy, it gave us three to four months of constant exercise, we ate well, we were OK financially. When we couldn’t fish anymore, our dads and uncles started getting sick and community health declined. Our family have been fishermen since 1850 but when we were refused a fishing licence, we watched our parents deteriorate, the financial struggle became a real struggle, we lost a way of life.”

In 2011, the NSW state government reintroduced permits that allowed fishing for cultural practices, which gave this community the chance to take part in the annual mullet run once more. “Bringing back cultural fishing lifts everybody up,” says Bill. “The whole community looks forward to it.”

Glenn Cooley agrees. “When the families said they were going to do it again, I said ‘I’m in, I’m in’. I’ve got two bad hips and two bad shoulders, but I’ll battle the soreness just to get this going again.”

On this particular cold and sunny morning, around a dozen men from the community have turned up to help haul the nets, as well as half a dozen students from Matraville High School. While the men keep an eye on the water, the teens collect sticks for the fire and get it lit. Later, they help to bring in the net, throw back the fish that are too small and prep the net for the next haul.

“I was a fisherman from when I was a kid,” says 74-year old La Perouse Elder, Cliff Ryan. “It means the whole world to me that I can come down here and see these kids learning how to fish. I’ve been mentoring for 50 years. Robert (Cooley) and the rest who have come through already, they’re still interested in mentoring the kids too.

The real value of the mullet run is about protecting and handing down skills and cultural values that are so vital to Aboriginal communities. While the La Perouse Aboriginal United Men’s Corporation were responsible for pursuing the appropriate fishing licence, Randwick Council was able to assist by bringing together relevant stakeholders, providing easy access to beaches and helping to create COVID-safe plans so the activity was able to be carried out in 2020 during the pandemic.

Hopefully, this is just the start of the story. There are many more fishing skills and practices that the younger generation at La Perouse have yet to experience, and that the older generations are keen to share. “Hauling was not the only fishing that our fathers and grandfathers did,” says Bill. “There were set nets, marking, night fishing. We’re hoping, down the track, that we might get the opportunity to start doing that again and fish all year around. Not just this time of year for mullet.” 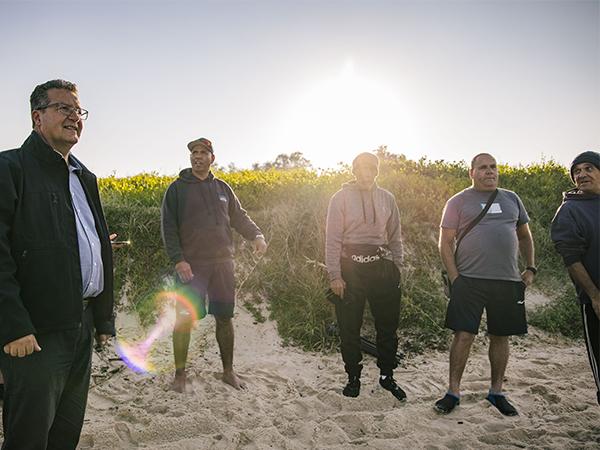