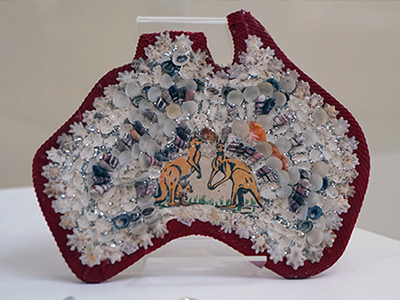 A very special exhibition has found a home in La Perouse Museum. Curated by Boomalli curator, Kyra Kum-Sing, a Malera Bandjalan, Mitakoodi woman, SHELL IT celebrates Aboriginal art and pays homage to the shell artists of La Perouse. And while the artworks themselves are breathtaking, it’s the stories behind them that will really make you smile.

An unassuming old coin collection in a glass cabinet tells the story of Aboriginal kids swimming under the bridge at Bare Island. As white folk passed over the bridge, the kids would yell “Mr Sir, throw us a coin!” and kids would swim to the ocean floor, storing coins in their mouths until they reached the shore.

“I remember those stories from when I was kid. Even though our Aboriginal communities have had their difficulties, they still knew how to have a good time, and I thought it was important to show that part of their story,” says Kyra. Although born on Bandjalan country, Kyra also calls La Perouse home. “I went to school at La Perouse and because I wasn’t originally from this country, I really wanted to celebrate the La Perouse community because that mob taught me so much. In small country towns, there was little work for Aboriginal people, so La Perouse was a safe haven for us.”

In the middle of the exhibition space is a large painting by Blak Douglas of Esme Timbery, who comes from a long line of shell workers from the Aboriginal mission community of La Perouse. Shellwork has been passed down to Esme from her great-grandmother, Queen Emma Timbery, a revered artist whose shellworks were exhibited and collected in London in 1910. The art practice dates back to the end of the 19th century, and would be sold by the women who practiced it. Missionaries working in the La Perouse community eventually encouraged women to take advantage of the tourism market and sell their shellworks as souvenirs. For many Aboriginal families, the sale of shellwork ended up becoming their only source of cash income. Esme Timbery, who recently turned 90, has had her shellwork in some of Australia’s biggest museums and galleries, including the National Museum of Australia and the Art Gallery of NSW. “It felt fitting to put her in the middle of the gallery because of the amount of work she has done for this community,” says Kyra.

Another special piece is Shoes, a small pair of baby slippers studded with tiny shells, made by an unknown student from Matraville. Courtesy of Ray Longbottom, the shoes pay homage to sisters Mavis Longbottom and Lola Ryan who used to run shellwork workshops in Sydney schools. Although very cute to look at, shellworked shoes were a reminder of the ‘disappeared’ Aboriginal children who were part of the Stolen Generations.

Through the thoughtful and personal curation of Kyra, SHELL IT achieves several things. It introduces the best of traditional and contemporary First Nations art to audiences, it honours the depth and breadth of artistic traditions from La Perouse, and through some very moving works, it honours the iconic cultural tradition of La Perouse shellwork, passed down from mother to daughter over generations. So, it’s time for you to organise a day out in La Perouse and view this unique artform for yourself.

SHELL IT is running until 29 August and select artworks are for sale. If you can't make it to the physical exhibition, you can also take a virtual tour via the Boomali website.