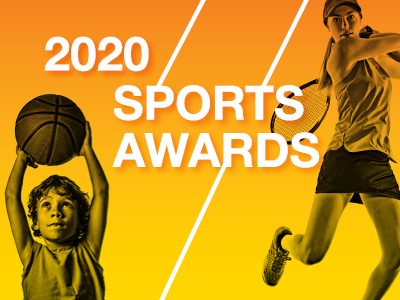 We were unable to host our usual presentation night for the Sports Awards 2020, but we didn’t want to miss the opportunity to celebrate some local sporting legends. The annual Sports Awards showcases Randwick City’s next generation of sporting stars as well as celebrating the high-profile sporting stars who have grown up and lived in the area.

We announced the 2020 winners a little differently this year, sharing a video with Mayor Danny Said and the winners. The video showed us some of the unique ways in which athletes adapted to the pandemic, with some even racing online in their living rooms!

Mayor Danny Said was impressed at the creativity of all nominees and winners of this year’s awards. “Despite the many challenges that this pandemic brings, it is wonderful to see how you have all adapted and pushed yourselves to remarkable and personal achievements.”

2020 Winner of the Bradley Matthews Memorial Award for Sporting Excellence: James Tirado
James Tirado is a vision-impaired para-athlete, who has represented Randwick/Botany Harriers, NSW and Australia. He has also represented Marcellin College Randwick in Athletics and Cross Country at regional, state and national events. He is a National All Schools Champion for the 800m para and holds the current Australian Record for 800m para for T13 vision-impaired athletes. James is a dedicated, hardworking athlete who not only has the determination to win state and national titles but displays care and understanding towards athletes with a disability. He has been a great role model for younger vision-impaired athletes by providing them guidance in undertaking sports and overcoming obstacles to achieve sporting success.

2020 Winner of the Randwick City Junior Female Sports Award: Piper Simpson
Piper Simpson first ran competitively for Clovelly School, aged eight. Two years later she was training with Up and Running and had joined Little Athletics. In 2019 Piper was unbeaten on the track at 800m and 1500m in her age group, culminating in double individual gold at School State and National Championships. Piper is a humble champion, valuing her sporting friendships and always encouraging her teammates to do their best. Last year Piper asked to enter the Balmoral Burn – an uphill sprint- and raised over $1000 for the Children’s Hospitals.

2020 Winner of the Spirit of Sport Award: Zoe Smith
Zoe Smith has participated in Coogee's Water Confidence program with enthusiasm and unbridled joy, reinforcing to all involved in the Junior Program that participation and inclusion brings joy, hope and success to all involved. Zoe has been a leader on the beach, first in the water, trying new skills, laughing, and celebrating the success and failures. Zoe has made those around her aim up, try your best and be better people. Zoe's involvement in the water confidence program this year at Coogee has not only enriched her experience and capabilities in Surf lifesaving but has contributed to ensure that Surf Life Saving is and will remain the cornerstone of our local community for everyone.

2020 Winner of the Randwick City Junior Male Sports Award: Ruben Shepard
Ruben started cycling in 2017, joining the Randwick Cycling Club and participating in the junior program every Saturday afternoon at Heffron Park. He quickly progressed and has been competing in events all over NSW and Australia, winning the NSW under 11 Cyclist of the Year Award in 2019 and travelling to the Netherlands and competing in a junior tour event there. Ruben has made a big contribution to junior cycling at Randwick Cycling Club, encouraging other kids to have a go and making lots of friends from within the club and around Australia.

2020 Winners of the Randwick City Hall of Sporting Champions:

Lisa Hardy, Karen Hardy
Both Lisa and Karen were the first ever women to compete against the men in surf lifesaving Iron Man racing. If it wasn't for Karen and Lisa ironwoman racing wouldn't have been established. Lisa's main achievement was paving the way for the ironwomen of today as she was an original pioneer of the sport. Lisa has been a credit to her club, family and the sport of surf lifesaving. Karen's has represented Australia in conducting surf awareness training, passing on her knowledge of the sport to the younger generation entering the sport. Both Lisa and Karen have also achieved many great results racing in numerous competitions such as: Nutri Grain series, Ella Bache series, Devondale and the Meadow Lea Series. They have represented their country, state and local club at many carnivals over the years, travelling all around the world to compete. Lisa was the first women to sign a contract with surf lifesaving and Kellogg's Nutri Grain Iron Man series. Lisa and Karen are now both retired but continue to give back to the community with coaching the next generation of surf sports athletes at Maroubra Surf lifesaving club.

Mathew Harper
Mat has obtained almost every Surf Life Saving award including the Gold Medallion. He has been a highly valued member of Maroubra Surf Life Saving Club for 15 years and currently holds the positions of Patrol and Club Captain, Captain of Surf Rescue 30, and is an integral part of training and assessment, development camps. Mat’s focus on education and lifesaving at the club has resulted in record numbers of proficiencies, Bronze and education numbers.  He is an active champion competitor, Nippers coach and mentor for young members who fosters a caring, safe and helpful environment for all his 250+ volunteers.  Mat is a strong and influential leader within the local community as well as in the surf lifesaving community.