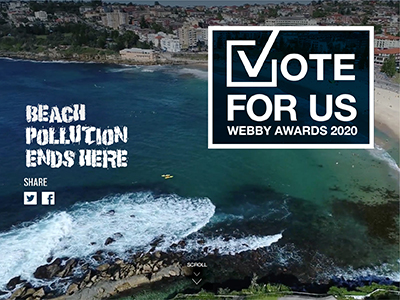 Our Beach Pollution Ends Here website, which was launched in November last year, has been nominated for a Webby Award. This is one of the internet’s most prestigious awards, which recognises excellence in digital communications and is voted on by an international panel.

The Beach Pollution Ends Here website, which formed the central part of a larger campaign to improve beach water quality, is one of five nominees in the category of Websites: Government & Civil Innovation.

“For the past 24 years, being nominated for a Webby Award has meant that you’re one of the best on the internet,” stated Randwick Mayor Danny Said. “I’m delighted, but not surprised, that a project worked on by the Communications, Business Systems, Spatial Systems, Technology Systems, Engineering and Environmental Health teams at Randwick City is considered worthy of competing with the best on the internet.

“This is an incredible achievement and I commend the staff who worked on it as well as the two external agencies we worked with, Paper Cranes and Ernst & Young. I encourage absolutely everyone to get behind this initiative and vote for the Beach Pollution Ends Here website in the People’s Voice category. And get your friends and family members to vote too!”

Votes in the People’s Voice Award can be cast at vote.webbyawards.com Simply enter ‘Randwick’ in the search bar to be taken to the voting page. Voting closes Thursday 7 May.

The Randwick Council nomination is up against a NASA website that explores how their technologies impact people’s everyday life, USAFacts which provides an overview of American government data, Vote411 which offers election-related information and The Perfect Candidate, a data driven site created by Australian Futures Project that aims to shift the national conversation from short-term problems to long-term solutions.

The Webbys are presented annually by The International Academy of Digital Arts and Sciences, a judging body composed of over two thousand industry experts and technology innovators. Past winners include Google, National Geographic, Nike, ESPN, NASA, Spotify, Instagram and The National Film Board of Canada.

Last year, people cast more than 3 million votes from 230+ countries and territories worldwide, and the site was visited by more than 5 million people.