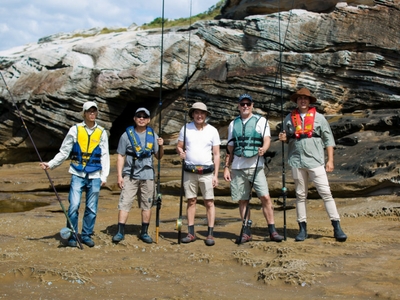 The Randwick Local Government Area has been identified as the location for the trial due to the popularity of rock fishing and the high number of fatalities.

“Rock fishing has claimed 17 lives in the Randwick City Local Government Area in just over a decade,” Mayor D’Souza said. “That’s 17 men, brothers, fathers and sons who have lost their lives partaking in popular sport. None of them were wearing lifejackets.

“Randwick Council has been a leader in trying to address this problem. We have worked with local groups and associations, conducted on-the-rocks research of fishers and installed multilingual rock fishing ‘death signs’ in dangerous fishing spots to shock fishers into changing their behaviour.

“I believe that compulsory lifejackets is a sensible next step and an important part of the solution to increase safety for rock fishers,” said Mayor D’Souza.

The NSW Government is expected to introduce the Rock Fishing Safety Bill 2016 into Parliament this month with the intention of the legislation coming into effect from     December 1.

Rock fishers in the area will be given a one year grace period before the new law is enforced with a $100 fine.

Read the media release from the NSW Department of Justice on rock fishing.

Jack Mundey to be honoured with memorial tree planting